Convoy - To accompany or escort, or a group of ships steaming together, usually under protection.  Its origin, via Middle English, is the French convoyer, to convoy or conduct. -From Origins of Sea Terms by J.G. Rogers

It had been six months since we motored into the protected harbour of Kinsale, Ireland and settled down for the winter.  Over the winter we worked on the boat, settled into a routine, and got used to not being on the move.  As spring came our thoughts turned toward the coming voyages and everything we needed to do to be as prepared as possible.

We inspected every part of the boat, mended things that were fixable, and replaced things that were beyond repair.  The local charity shop was the recipient of at least three large bags of extraneous stuff that could be passed on, and the dumpster was filled with broken bits and bobs that had never found their way off the boat.

We spent at least half of the month of April living at anchor in the River Bandon, getting used to being off the dock and testing out systems that had laid dormant for the winter.  Several storms came screaming down the coast, but Paragon held her own and we began to feel ready to leave.

Going over the checklist, we were pleasantly surprised by all the check marks...did we really complete our repairs?

This is just a short list, but it gives an idea of how we spent most of our days leading up to our departure.  Some tasks were more fun than others.  We spent a day tied up to the wall near the town dock where, as the tide goes out, the boat is left on a ramp to dry out.  With the help of friends we power washed the hull, inspected the propellor and rudder, and replaced all the zincs.

Other things were not so much fun.  After refueling at the town dock, we headed back out to our anchorage spot in the river and, without warning, lost our engine.  One moment we were chugging along and the next the engine was slowly losing power until it stalled completely.  We were lucky that we were able to unfurl the staysail and sail to the anchorage where we dropped the hook, but the reason for the engine failure was a bit of a mystery.

After trying every solution he could think of, Drake rowed to town in search of a mechanic.  He returned with Graham.  Graham owns and operates Ocean Addicts, a dive center and B&B based aboard motor vessel Embarr in Kinsale harbour.  He also has a Perkins diesel engine, though a slightly different model, and was a wealth of information and help.  After methodically checking the engine he discovered that an improperly installed fuel filter was stifling the flow of fuel.  A quick reset of the filter and the engine fired up beautifully.

We also discovered that the air intake was almost completely encrusted with debris and goo which certainly didn't do the engine any favours.  After a good scrub the filter was put back and all seemed well.

Our departure date of the first of May came and brought with it high winds, hail, and rain.  We spoke with our friend Kevin, who we planned to convoy with up the coast of Ireland, and it was agreed that we should wait out the bad weather.  The next few days were spent at anchor, preparing for our journey as the winds buffeted the boats.

The fourth of May dawned cloudy but calmer and we decided the time to leave had arrived.  At precisely nine in the morning s/v Exodus, Kevin's boat, and Paragon lifted their anchors and motored out of Kinsale.  There was little wind, but a tiny bit of chop bounced the boat as we secured the last remaining items. 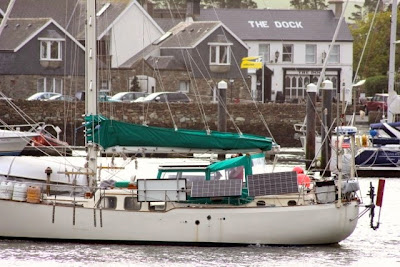 It had been so many months since we had been out that I had...I don't know, been lulled into a false sense of reality.  The plan was to sail/motor approximately 35 miles along the coast to Sherkin Island where we would anchor and wait out an upcoming storm.  Surely I didn't need to take sea sickness medication for such a short trip down the coast...especially when there was such little wind predicted. 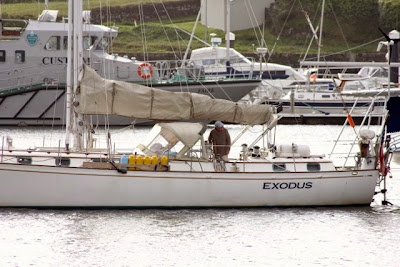 I would come to regret this decision. 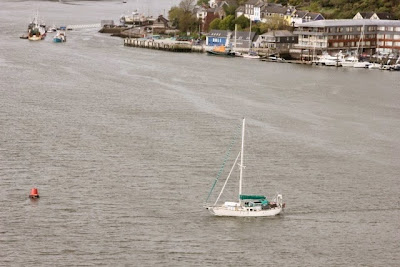 As we exited the protected harbour that had been our home for the past winter, we immediately encountered a 15 knot headwind and choppy swells.  It was necessary to motor directly into the chop and wind for approximately six miles, in order to clear the Old Head, before turning to the west.

The Old Head is a craggy peninsula, topped with a striking lighthouse, that extends into the sea just south of Kinsale.  Home to nesting birds, a world class golf course, and spectacular kayaking, it is also a treacherous area surrounded by jagged rocks and swift currents.  The Old Head is known for being the nearest land point (11 miles) from where the RMS Lusitania was sunk in 1915.  The further we motored out of the harbour the larger and more confused the seas became.

We watched as Exodus began to bob and roll in front of us and knew our time was coming.  As we lost the last of our protection of land on the port side we began to encounter even greater swells.  Suddenly we were getting lost in the trough of the waves, riding up the crest before slamming once more into the trough.

I lost what little breakfast I had managed to eat and felt my limbs ache with general malaise.

After rolling about for an hour hour we finally cleared the Old Head only to be hit with the full force of the swells that had built up over the course of several windy days.  Paragon was no longer a boat, but rather a mad carnival ride that shuddered with every new white cap.

With the Old Head in the distance off our starboard side and the wind buffeting our port side, I took the wheel as Drake prepared to unfurl the staysail when...

I saw it coming.  We were sliding up from the trough of an enormous wave, but not fast enough to escape the massive curling crest looming over us.  The wave rammed the port side of the boat with a force that made me cringe and covered us with with furious foam.

There was an instant silence as my eyes widened and Drake turned to look at me in disbelief and horror.

With my words still hanging in the air, Drake leapt over over to the helm and feverishly began checking instruments while simultaneously telling me to get the staysail out.

I turned and saw Drake fumbling with the auto pilot which was refusing to engage.  It was on our list of things to check before we left port, but somehow we had let that very important task slip through our net and were paying dearly for the transgression.

Paragon was a sitting duck at this point.  20 knots of wind and giant swells on her port side were slowly pushing her towards the barbed rock face of the Old Head that had claimed so many boats over the years.  A quarter of a mile of water was all that separated us from disaster.

With sails unfurled, we called Kevin on the VHF to let him know what had happened.  When he asked what we wanted to do, Drake simply said that he just wanted to get away from the rocks.

As I gripped the wheel with shaking hands and a stomach that refused to settle, Drake headed down below to the engine room.  His enviable steel stomach faltered as he lay in the quaking room surrounded by diesel, heat, and fumes.  Meanwhile I lay draped over the helm, staring at the sails and rocks...too sick to be scared.

Back and forth Drake went, from the cockpit to the engine room, until he bounded up shouting that he had found a blockage in the center tank fuel line (the tank we were running on).  Fuel wasn't even making it out of the tank and had left the engine futilely sucking air.

He had switched tanks, bled the engine and, with a quick "Dear God, please don't let me fuck this up", turned the key.

The engine turned over for several seconds as the fuel made its way to the injectors and then we heard the sweet sound of the Perkins roaring to life.

Drained and reeking of diesel, Drake grabbed my plastic bag and was violently sick.  I half-heartedly asked if a couple who played together stayed together, what did couples who shared a sick bag do? He only stared and then asked if I could stay at the helm for another ten minutes so he could lay down and try to recover from his time below.

Thus the relay began.  I steered for a time, then he did, then back to me, and both of us getting sick.

During one of his off-watches Drake finally figured out why the auto pilot was not working.  A simple loose connection was the culprit and, with the CPT back on line, we were both able to relax a bit more.

The rest of our journey to Sherkin Island was uncomfortable yet uneventful.  The swells never did settle, but having the auto pilot allowed us to conserve energy.  Drake eventually felt well enough to stand a constant watch and let me retreat to a berth below to curl up and attempt sleep.  Unconsciousness lay stubbornly beyond my grasp, but I managed to evade being sick for the first time in several hours as I lay wedged between pillows.

The swells immediately settled as we entered the protection of Baltimore Harbour in late afternoon and I popped my head into the cockpit as Drake circled the anchorage.  Kevin dropped his anchor and we quickly followed suit.  For the second time that day the engine went silent.  However, this time it was intentional and oh-so welcome.

Begging off a dinner invitation from Kevin, we promised to meet up for coffee the next morning after we had cleaned up from the day.

Silence enveloped us as we stared at the beauty surrounding the boat.  The anchorage had a bit of a roll, but nothing compared to the seven hours we had just endured.

Drakes words quietly drifted over to me as I thought about what he had said.  It was true.  We could have died, or certainly have lost the boat.  If we hadn't managed to unfurl the sails in time and get away from the rocks we would have become another statistic...another boat lost at sea.  I don't think there would have been time for a rescue boat to reach us before Paragon's hull met her fate upon those razor sharp rocks.

There was certainly a bit of luck and, despite not being a religious person, some powerful guardian angels were watching over us that day.  However, we made a bit of our own luck as well.  All the years Drake has spent learning about the operation of the boat and its mechanics, the endless hours trouble shooting problems in a quiet anchorage, and taking notes as more experienced mechanics helped him with problems had paid off.

In terrible conditions one of the worst things had happened and, though the stress level was high, panic never set in.  We worked as a team, held it together, and stayed focused and on task.

So yes, we were lucky.

The day had been a trial by fire (and water!) and we had survived to sail another day.

Looking out over the calm water I simply whispered the most heartfelt thank you before retiring for the evening.